Pastor Rich Holdeman
Dr. Richard Holdeman is the senior pastor of the Bloomington Reformed Presbyterian Church in Bloomington, IN. He is a graduate of Yale University where he received a B.A. in biological psychology and of Indiana University where he earned a PhD in molecular and cellular biology. He is a Senior Lecturer in the Department of Biology at Indiana University where he has been teaching since 1997. In 2005 he graduated from The Reformed Presbyterian Theological Seminary with a Master of Divinity and was ordained as a minister of the gospel that same year. In addition to interests in science and theology, Dr. Holdeman is an avid sports enthusiast. He coached the Indiana University Ice Hockey Club for thirteen seasons and retired as the coach with the most wins in the history of the program. In 2013 he was inducted into the American Collegiate Hockey Association’s college club hockey hall of fame. Dr. Holdeman has served on the board of trustees for the Reformed Presbyterian Theological Seminary in Pittsburgh, PA from 2000-2012 and again beginning in 2017. He was the board president from 2006-2012. He also served for seven years as the board president of Lighthouse Christian Academy, a K-12 grade school in Bloomington, IN. He believes that his strongest asset is his wife, Amy. They have been married since 1989 and have four daughters, two of whom are married. 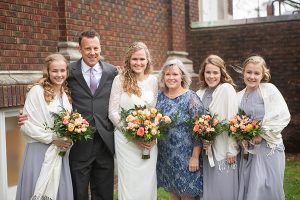 Pastor Philip McCollum
Philip grew up on Coleraine, on the North Coast of Northern Ireland.  He studied Geography at Queen’s University, Belfast, and after a gap-year working with the Reformed Presbyterian Church in Galway (Republic of Ireland), he entered seminary in Belfast at the Reformed Theological College.  After completing seminary studies, Philip obtained a certificate in counseling at Christian Counseling Education Foundation (CCEF), Philadelphia.  He then worked for eight years as associate pastor at Shaftesbury Square Reformed Presbyterian Church in the downtown area of Belfast.  In 2011, he married his wife Heather (originally from Marquette, Kansas) and they now have four children.  In August 2018 he moved to Bloomington to begin work at Bloomington Reformed Presbyterian Church.

In addition to our two pastors, our congregation also has six ruling elders and six deacons.

We, the Bloomington Reformed Presbyterian church, seek to glorify God by being faithful to His purposes for us as stated in Mark 12:30-31 and Matthew 28:18-20 by being committed to God, committed to people, and committed to growth.